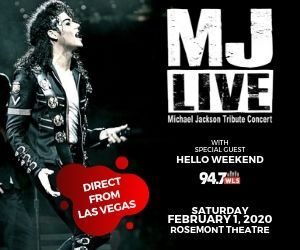 SAVE 10% Off Enter Offer Code ROSEFUN before choosing your seats to receive discount.

A HIGH-ENERGY TRIBUTE TO THE KING OF POP

In 2009 the world lost a veritable pop icon. Michael Joseph Jackson rose to prominence as a member of the family band the Jackson 5 before launching a solo career in 1971, the likes of which no other living pop star has been able to eclipse. With a highly distinctive voice and moves smoother than Barry White on a good day, Jackson has left behind a legacy of momentous music. Don’t miss this energy-filled tribute to the King Of Pop!

Touted as the ultimate MJ tribute show, it’s showcase of verified Michael Jackson hits from every era of his reign including Bad, Billie Jean, Beat It, Smooth Criminal, Don’t Stop Till You Get Enough and Thriller, the production has it’s very own MJ impersonator, a live backing band and dancers. Some say the voice of the star of the show is so spot on that if you close your eyes it’s as if the King has returned!

Welcome to Chicagofun.com Your One Stop Fun Guide To The Chicagoland Area. We would like to personally welcome you to our online community. We are the premier Online Resource Directory dedicated to having fun in the Chicagoland area. Our comprehensive guides to fun things to do, party planning, special events, travel tips and fun family entertainment will keep you informed on all the latest information about having fun in Chicago and beyond.