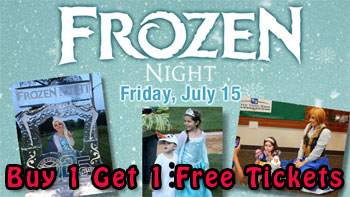 The Kane County Cougars have announced that one of the most highly anticipated theme nights of the season will return to Fifth Third Bank Ballpark when they host Frozen Night presented by All Dressed Up on Friday, July 15. First pitch is scheduled for 6:30 p.m. against the West Michigan Whitecaps.  Enjoy Face Painting & Sand Art sponsored by Chicagofun.com

The night will feature a special Frozen Deck Party package for $29 that includes a game ticket for the Right Field Patio Deck, a food and beverage spread featuring chicken tenders, hot dogs, blue Sprite and popsicles plus a private meet-and-greet with Elsa, Anna and Kristoff. In addition, fans who have purchased a deck party ticket for the night will be allowed special access onto the field to view the spectacular Frozen-themed post-game fireworks show. A limited quantity of Frozen deck party tickets are available and reservations are required. Tickets for the deck party are available now by calling 630-232-8811 or by ordering online at kccougars.com.

In addition to the exclusive deck party, the night will kick off with a pre-game costume parade while Cougars staff members will be wearing Frozen costumes, courtesy of All Dressed Up. Fans are encouraged to dress in costume as their favorite Frozen character and join in the fun.

Following the post-game Frozen-themed fireworks show fans of all ages will be able to run the bases.