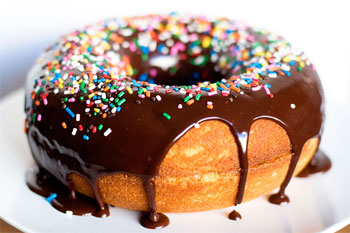 Mark your calendars for Free Doughnuts this Friday, June 3, 2016 on National Doughnut Day!  You can get your free donuts to celebrate at these participating Chicagoland Donut store locations.

TRIVIA: Did you know that in the U.S. alone, more than 10 billion donuts are made every year?

Dat Donut. Lots of free donuts here and you can also get a great discount of $1 off a dozen glazed donuts. (Dat Donut, 8251 S Cottage Grove Ave, Fri 24 hours.)

Dunkin Donuts will give you a free doughnut with any coffee or cold beverage purchase on Friday.

Kanela. On Friday only,  National Donut Day will guests be able to get a special coffee and donut–inspired pancakes. One of their favorites is their coffee cake streusel short stack topped with an espresso créme anglaise. (Kanela, 1048 N Milwaukee Ave, 8am–3pm.)

Krispy Kreme will give each customer one free glazed doughnut, no purchase required. This is at Krispy Kreme stores only (Beechmont Avenue in Anderson Township), so don’t try to grab one off the supermarket shelf and eat it, wiseguy.

Busken Bakery (Ohio) will have free glazed donuts in the morning, and discounts on a dozen.

MAK. BOGO — If you purchase of any bowl, wrap or chicken wings, you will be awarded a FREE five spice or black sesame donut (MAK, 1924 W Division St, 11am–10pm.)

Tim Horton’s typically posts a coupon for a free doughnut on its website the morning of National Doughnut Day, if you have any Tim Horton’s (Canadian chain) in your area. In Canada, you’ll find one on every block.

LaMar’s (Midwest and South) will have free doughnuts Friday.

Here’s the background on National Donut Day which is always the first Friday in June.