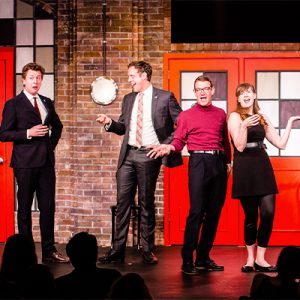 Fuel a night of non-stop laughter by grabbing a pre-show bite and specialty cocktails at 1959 Kitchen & Bar before catching a show at the legendary birthplace of improvisation, The Second City.

Throwing a Party? Whether your focus is pre, post, or in-show celebration, we have the resources to make your event the year’s most memorable. Mobile bars, passed apps, themed private rooms, indoor and outdoor spaces– let us serve you! 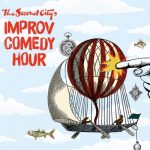 A brand new twist on a classic art form…from the mind of Mick Napier. A wildly unpredictable display of classic improvisational games and techniques finessed for the modern age. Despite the name, we couldn’t fit all this play into just one hour. Learn More
Performance Times:
Mondays at 8PM
Suggested Rating: R.

Legendary Laughs- We’re pushing all politics aside and putting laughter in the spotlight! See some of our all-time favorite sketches and songs pulled from our vastly over-stuffed comedy vaults paired with plenty of Second City’s world-famous improv. Come laugh with your co-workers! Laugh with your friends! Laugh with complete strangers! Learn More
Performance Times:
Saturdays and Sundays at 4PM
90 Minutes with a brief intermission
Suggested Rating: PG-13. 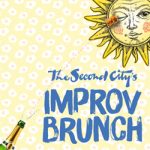 The Second City scrambles together two of everyone’s favorites, comedy and brunch, for a scrumptious spread followed by an all-you-can-laugh, totally improvised experience from the city’s finest. It’s the Sunday Funday dreams are made of! Tickets include a brunch buffet, bottomless mimosas, and a 45-minute improv show! Seating is first come first served. Doors open at noon for brunch service and the improv performance begins at 12:45. Bottomless mimosas are served for the length of the event. We recommend arriving 15 minutes before doors open. Suitable for adults and savvy teens. Learn More 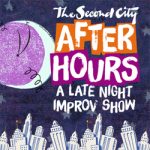 The Second City’s After Hours! Stay up late with The Second City as we bring you our latest and greatest. It’s interactive. It’s hyperactive. It’s the most fun you’ve had past bedtime. Come see an entirely improvised, entirely ridiculous 60 minutes that’ll leave you with a full-fledged comedy hangover. Learn More
Performance Times:
Fridays and Saturdays at 11PM
Suggested Rating: R

Visit Their Website for more information, tickets and show times or call the box office at 312-337-3992.

CHECK OUT MORE SAVE ON FUN COUPONS BELOW!!